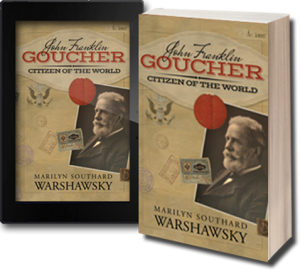 Minister, educator, devoted family man, philanthropist, statesman, and intrepid traveler— John Franklin Goucher’s far-reaching contributions bridged two centuries. Well known in cities, towns, and villages around the world, he was a champion of educational opportunity for all, regardless of gender, race, religion, or social class. Rooted in his deep faith, he, along with his wife, Mary Fisher Goucher, founded and supported schools at home and abroad. Ahead of his time, he emphasized access for girls and women and African Americans, which encountered traditional bias and caution; but he broke through barriers in a way that still has an impact in many parts of the world.

Circling the globe three times and making countless trips across the Atlantic and the Pacific, this man of Maryland became a world-renowned figure and connected personally with schools and students, missions and missionaries, intellectuals and politicians. His influence continues to be felt by people around the world who attend or admire the institutions that are his living legacy. As one friend noted, John Goucher set a standard for international inclusion: “To him, there was no foreign land . . . He passed from one country to another without a sense of strangeness.”

Marilyn Southard Warshawsky’s biography colorfully and comprehensively details this remarkable man’s life and work. From shipwreck to camel rides, Methodist mission work in India, Korea, and China to meetings with Abraham Lincoln and Japanese leaders, Goucher’s adventures are of another time, yet have continued significance today and will inspire educators everywhere far into the future.

Now available in e-book and print for purchase at these locations:

Marilyn Southard Warshawsky received her bachelor’s degree in Classics from Goucher College and a master’s degree in Education from the Johns Hopkins University. She has been a longtime trustee and is a former chair of the Board of Trustees at Goucher. She has also served as a board member or volunteer with other educational, historic preservation, and religious-affiliated organizations in Baltimore, Maryland.

She can be contacted at marilynwarshawsky@gmail.com